Blue Lily, Lily Blue is the third book in The Raven Cycle by author Maggie Stiefvater. It was released October 21st, 2014.

There is danger in dreaming. But there is even more danger in waking up.

The trick with found things though, is how easily they can be lost.

Friends can betray. Mothers can disappear. Visions can mislead. Certainties can unravel.

The prologue begins with Persephone on a hilltop, teaching Adam how to tap into the ley line's power. At the same time, Blue and Calla are rifling through Maura's room and discover what Maura already knows - Artemus, her former lover, is underground, and Blue and the boys are part of something much larger.

Meanwhile, Maura is underground. As she continues deeper, she discovers a mirrored lake.

In the first chapter, Blue and the boys are in Cabeswater. Aurora, Ronan's mother, resides there, using the ley line to exist. Blue, Gansey, Adam, and Ronan begin exploring the cave. While climbing down, Gansey falls off a ledge. Ronan and Blue implore Cabeswater for help, and a huge flock of ravens flies out of the pit, chanting "Make way for the Raven King."

Gansey, Adam, Ronan, and Blue drive to the airport to pick up Malory, an old friend of Gansey's who's very knowledgeable about ley lines. He shows them a picture of a tapestry that once belonged to Glendower. The tapestry showed three women with blood-red hands raised to the sky. They all were identical to Blue.

Meanwhile, Blue attends her first day of school. Noah joins her as she waits outside the counselor's office. They discuss colleges, but suddenly, for an unknown reason, Noah jumped up and continued to stretch upward. Papers flew off of the desk, and Noah disappeared.

Blue returns to Monmouth Manufacturing in search of Noah and runs into Gansey. Noah returns, and again begins to start a whirlwind using Blue's energy, but Blue cuts him off, and he disappears.

That night, Calla, Persephone, and Blue are giving a reading to an impressive-looking man. He asks them where Maura is, and takes the Three of Swords - which shows three swords stabbing a heart - from Calla's deck. Calla is about to follow him, but Persephone stops her, saying "That one is not to be touched." It is later revealed that that man is Colin Greenmantle.

The next day is the first day of school at Aglionby. Ronan and Adam are the first ones in the classroom. Gansey joins them, followed by their new Latin teacher, who introduces himself as Colin Greenmantle. Greenmantle is also the Gray Man's former employer.

That night Gansey goes to Adam's home above the church. Adam notes that he looks out of place there compared to Ronan, possibly implying that Ronan has been there numerous times.

The next day after school, Blue is distractedly doing her homework. Orla distracts her further, and tells her she needs to have more friends than just the Raven Boys. The argument escalates, until Gansey shows up to pick Blue.

That night as Adam is working at the shop, Cabeswater communicates with him. Adam discovers Cabeswater wants him to fix something and promises he will do it within the week. Ronan visits, and the two have a small argument. When Adam goes back to his car, he finds Ronan has left him lotion for his chapped hands.

Back at Monmouth, Malory and Gansey wonder out loud why Glendower was brought across the ocean to be put to sleep in Virginia. Malory speculates that they were looking for Cabeswater, so that their king could sleep for hundreds of years. After Malory goes to bed, Noah arrives. Gansey tells him that he will use his favor to restore Noah, but Noah is uncertain.

That same night, Blue discovers Jesse Dittley's name on the list of people that will die within the year. She is reminded that Gansey's name is also on the list, and calls him. Gansey feels both overjoyed and guilty. Ronan finds him sitting on the floor, and cheers him up with a song.

Henry Cheng, an Aglionby student, asks Gansey to sign his petition, saying that Gansey's pedigree makes his vote more valuable. Gansey goes to talk to the headmaster for an unspecified reason, and Ronan takes Adam to the Barns. Ronan admits that Matthew is an object Ronan dreamt himself and that he is trying to dream something that will allow the living dream objects to live after the dreamers die.

Meanwhile, Piper has done some research on ley lines. She now knows that Maura is underground, and begins preparing for when she and Colin will go underground to find her ley lines.

That afternoon, Blue strikes a deal with Jesse Dittley. She will clean his yard, and he will let her explore his cave. Half-way through the job, Noah gets a blank look on his face and says "Blue Lily, Lily Blue." Jesse steps in with a mirror, causing Noah to scream and then disappear. Jesse invites her into the kitchen, and then Calla and Gansey arrive. They were all looking for Blue, who didn't tell them she was going to be gone. They return to 300 Fox Way, where they gather in the kitchen along with Persephone, Ronan, and Adam. Blue tells everyone that Jesse is on the death list, and Adam realizes that one of them is on it. When he confronts Blue about it, he discovers that it's Gansey.

That night, in the early hours of the morning, she calls Gansey and they drive into the mountains. They nearly kiss, but with Blue's curse, they know they can't. On the way back, the meet Henry Cheng, who's car broke down. Gansey lends him his phone, and he and Blue bicker.

The next day the four travel into the cave. After walking down a long passage, they come to a heavy stone door. Ronan kicks it in, and on the inside is a cavern filled with ancient relics. In the middle is a large coffin. They lift the cover off, and discover, not Glendower, but a woman. They bring her back to 300 Fox Way, where Persephone affirms that she was expecting her. The woman is Gwenllian Glendower, Owen Glendower's daughter. She tells them that Blue's father was the one who tied her up and tried to put her to sleep. She also said that instead of sleeping, she stayed awake for hundreds of years, and that the Dittley's blood silenced her. Jesse is happy to see her go.

Late that night, Adam and Ronan discuss how to get Greenmantle back. Adam has a plan, but he needs Ronan to dream up evidence to frame Greenmantle. When Ronan dreams, he creates a fake Ronan for his nightmonsters to feast on. The fake Ronan is covered in blood and dies in front of the two. Ronan hands Adam a manila envelope containing the evidence he needs.

Later that evening, Adam's father visits him, asking Adam to call off the hearing. As he raises his hand to strike Adam, Adam calls on the power of Cabeswater and produces a thorn in his father's palm. His father is uncertain, and then leaves.

Meanwhile, Piper and Colin are exploring the cave when Piper suddenly stops, claiming she heard a noise. Colin didn't hear anything, but gratefully agrees when she says they need to leave.

Later that week, the Gray Man visits 300 Fox Way. He tells Blue about Ronan and Adam's project, but doesn't disclose details. He then has a conversation with Gwenllian, who tells them that Iolo Goch, Glendower's right-hand man, encouraged Glendower to go to war. To stop this, Gwenllian stabbed him, and was buried in that false grave as a punishment. After that, the Gray Man and Blue head out to the Dittley's cave. When they arrive at the cave, they are greeted by a three-headed monster with rainbow scales. Jesse remarks that Gwenllian was probably keeping them from leaving the cave.

When they get back, Gwenllian brings Blue to the attic, where the two mirrors still stand apart from each other. She tells Blue that both she and her are mirrors and then pushes Blue to stand between the mirrors, and instead of vanishing like Neeve did, Blue stays safe.

The next morning at Aglionby, construction men and women work to repair the scaffolding. The scaffolding fell, and would've hit Adam. But around Adam is a circle free of dust and stone. Adam says he just thought it, and it happened. The next day is the day of Adam's court case against his father. Gansey and Ronan step in as key witnesses. The outcome of the case is unknown until the events of The Raven King.

Sometime after, Adam takes Blue and Noah to work on the ley line. As Adam scryes, he gets lost from his body and has a vision of Maura and Artemus trying to open a door. As he moves towards the door, he hears someone say that it takes three to open the door. Also while scrying, he discovers the reason Cabeswater wants him to fix the line is so that it can connect to other ley lines. Later, Persephone is giving Adam his last lesson at a general store. When he goes inside to get a cola, the clerk tells him he came alone. When he goes back outside, Persephone is gone. Quickly, Adam returns to 300 Fox Way. He scryes and discovers that Persephone is in the attic, between the mirrors. By the time they reached her, she is dead.

Meanwhile, Adam and Ronan threaten Greenmantle with the condemning evidence. He tries to convince Piper to leave with him, but she insists on exploring Jesse's cave. She, Colin, and two hired men go to the cave entrance, and find Jesse guarding it. The Gray Man arrives, and takes out one thug, but before he can dispatch the other, Piper points a gun at his head. When Jesse still won't back down, she shoots him. Colin backs out, but Piper forges on.

Meanwhile, Ronan, Gansey, Adam, and Blue head to the Cabeswater cave, leaving Calla and Matthew at the entrance. The trees warn them not to wake the third sleeper. After making it down the ledge, the four discover a giant valley filled with the skeletons of all kinds of animals. The walls are lined with nests, and the skeletons are all poised to run towards the valleys exit. They are faced with the task of waking them, and Ronan uses his dream thing to accomplish it. Blue and Ronan were able to hop on a creature and ride it through the exit, but Gwenllian, Adam, and Gansey stay trapped in the valley.

Ronan and Blue find themselves by the same lake Maura passed. When Blue realizes it's a mirror, she is able to walk across it and through a tunnel. At the end she finds Maura and Artemus kneeling in front of a red door. Just as they're about to escape through the other end of the cave (Jesse's cave) Piper, her remaining thug, and the Gray Man arrive. Blue hugs the Gray Man, and unbinds his hands. The Gray Man attacks. Maura, Blue, Artemus, escape, and the cave collapses on Piper and her thug. The Gray Man, Maura, Blue, and Artemus reunite with Calla, Gansey, Ronan, and Adam.

In the epilogue, Piper wakes up to find Neeve staring at her. They enter the chamber, and Piper wakes the third sleeper, who is not human, but a black, shiny, creature with many legs. 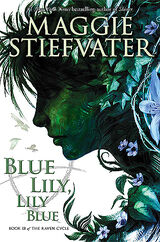 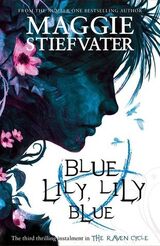 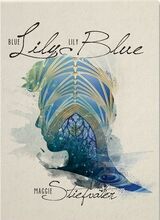 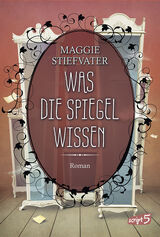 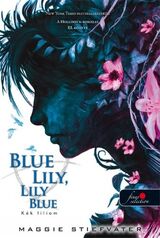 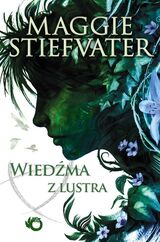 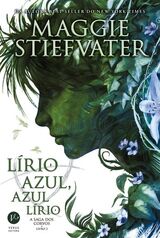 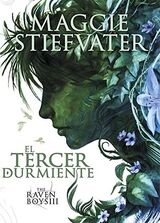 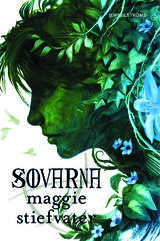 Swedish cover
Add a photo to this gallery

Retrieved from "https://theravenboys.fandom.com/wiki/Blue_Lily,_Lily_Blue?oldid=9566"
Community content is available under CC-BY-SA unless otherwise noted.