Blue Sargent lives at 300 Fox Way with her mother, Maura Sargent, and the other psychics. She lacks psychic abilities but rather increases others powers with her presence. In her junior year of high school, and against her better judgment, Blue befriends several Aglionby boys—Richard Gansey, Adam Parrish, Ronan Lynch and Noah Czerny—and joins them in their quest for the sleeping Welsh king Owen Glendower.

Blue comes from a family of psychics and is the only resident of her house to lack this ability. When the people in her house are doing readings, she often attends them, as she makes things loud and gives off extra energy. She is described as being a sort of magnet for the supernatural; the magnifying glass that focuses the sun. Gansey also compared her to "the table at Starbucks everyone wanted". Her whole life, she has been told by her family that if she kisses her true love, he will die. Because of this, she has avoided boys and dating for most of her life.

Her father disappeared right when she was born; his name, as Maura says near the end of The Raven Boys, was Artemus. No one knew where he went, or if he could help it. Maura met him after she, Calla, and Persephone had done a ritual. Her theory is that they released him somehow from Cabeswater, where she believes he was trapped.

In The Raven King she wants to go to college, and see the world.

Blue is sarcastic, very opinionated, adventurous, independent, and most of all sensible, despite her best efforts to be otherwise. She is ambitious with big dreams for her future, which often leads to frustration when she's faced with the reality that opportunities like college cost money she doesn't have. Blue loves nature and the environment. She is creative according to the word's more common meaning: she likes making things with her hands, like her clothes and the decorations in her room. She's a feminist and refuses to be objectified by random men, or treated as a "girlfriend" and not a real friend by Adam.

Although she grew up rather ostracized because of her standoffishness and peculiar family, by the time she was a teenager, her strangeness became an asset and she's described as extremely cool. Blue is fiercely loyal to her friends; like Ronan, she doesn't believe in casual relationships. Unlike Ronan, she is people-savvy and knows her way around Henrietta social cues. She loves her family deeply, although she often feels like an outsider. She is hard-working and has multiple jobs. Which includes Nino's a popular restaurant for Raven Boys. It was here where she met Ronan, Noah, Adam, and Gansey.

In the Raven Boys, Blue considers herself an amplifier with no power of her own. But in Blue Lily, Lily Blue, Gwenllian teaches her that there is more to being a mirror--and a witch--than just sitting there while others do the real magic. For starters, Blue is able to withstand others' mirror magic and consciously lend and take away her power from others.

Blue is no more than five feet tall, with a compact build and ambiguous ethnicity. Her dark hair is short and spiky, held in place with a handful of multicoloured hair clips. She is described as having large eyes, dubious eyebrows, and a curious mouth. Blue’s personal style is loud and eccentric. She likes to layer loose patterned shirts and hand-shredded dresses for a truly unique aesthetic.

Gansey is the true love of Blue. At their first meeting, Blue considered Gansey to be just another rich playboy, but her view changed after she got to know him.

At first, Adam and Blue felt attraction for each other and started dating for a short period of time before breaking up. They become close friends and trust each other a lot.

Blue's and Ronan's friendship is sarcastic and sibling-like. Even though they didn't really like each other at first, over time they come to care for each other deeply.

Blue and Noah quickly became close friends as Noah decided he would do anything for Blue. Blue trusts Noah very much and upon learning he was a ghost, she supported him and let him draw power from her in order to stay visible. Noah also lets her kiss him since he couldn't die and she wanted to try it at least once, making Noah her first kiss.

Upon meeting Henry, Blue was initially repulsed. However, after spending more time with him at a party and "shedding her prickly skin", they discuss taking a vacation to Venezuela together and bringing Gansey, who Blue insists would hike instead of fly. Near the beginning of The Raven King, Blue realizes that her perception of Henry may be off (when he warns them about Opal being visible by claiming their tailgate is open) and that he may have many layers to him, which unsettles and intrigues her. 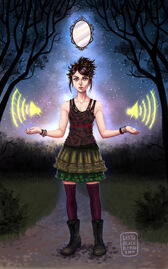 Retrieved from "https://theravenboys.fandom.com/wiki/Blue_Sargent?oldid=9581"
Community content is available under CC-BY-SA unless otherwise noted.