Call Down The Hawk is the highly anticipated first novel of The Dreamer Trilogy; sequel trilogy to the beloved The Raven Cycle series. It was announced for preorder on February 6th, 2019 with a release date of November 5th 2019.

On June 6th, 2019 Scholastic released the official first 8 chapters as a preview of the book online.

From the #1 New York Times bestselling author of The Raven Boys, a mesmerizing story of dreams and desires, death and destiny.

The dreamers walk among us . . . and so do the dreamed. Those who dream cannot stop dreaming – they can only try to control it. Those who are dreamed cannot have their own lives – they will sleep forever if their dreamers die.

And then there are those who are drawn to the dreamers. To use them. To trap them. To kill them before their dreams destroy us all.

The story will focus heavily on Raven Cycle characters like Ronan Lynch and his brothers, introducing newcomers Jordan Hennessy and Carmen Farooq-Lane. This book directly follows the events that took place in previous novels.

The "Gangsey" does not appear together, however Adam Parrish appears as Ronan's boyfriend and Blue and Gansey are mentioned and appear briefly in the form of phone exchanges.

Ronan Lynch is a dreamer. He can pull both curiosities and catastrophes out of his dreams and into his compromised reality.

Jordan Hennessy is a thief. The closer she comes to the dream object she is after, the more inextricably she becomes tied to it.

Carmen Farooq-Lane is a hunter. Her brother was a dreamer . . . and a killer. She has seen what dreaming can do to a person. And she has seen the damage that dreamers can do.

Parsifal Bauer is a Visionary, able to experience intensely vivid and detailed premonitions, specifically focused on "Zeds" (dreamers) and other Visionaries.

Due to past issues with advanced reader copies being leaked and pirated, Call Down the Hawk will not be available in ARC, only samplers featuring the first few chapters. To reward fans for not only preordering but also supporting independent bookstores, Maggie has teamed up with Fountain Bookstore in the US to offer signed copies that come with an exclusive bookplate and a "secret surprise". UK fans can preorder from Seven Stories to get the exclusive bookplate that will be autographed. 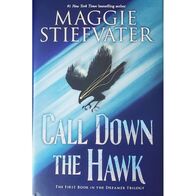 Owlcrate Edition
Add a photo to this gallery 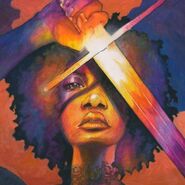 Retrieved from "https://theravenboys.fandom.com/wiki/Call_Down_the_Hawk?oldid=9596"
Community content is available under CC-BY-SA unless otherwise noted.