Noah Czerny was a student at Aglionby Academy. He is best friends with Richard Gansey III, Ronan Lynch, Adam Parrish, and Blue Sargent.

Noah Czerny attended Aglionby Academy at least seven years before his friends. He was Barrington Whelk’s best friend and roommate. He offered to help him find the ley line. Whelk turned on him and murdered Noah as part of a misconceived ritual sacrifice. He was beaten to death with a skateboard to the side of his head.

When Noah died on the ley line, his soul opened up to every moment he ever had or ever would experience. It is revealed that the voice Gansey heard when he was dying of wasp stings was actually Noah's spirit who spoke to Gansey as he died and told him, "You will live because of Glendower. Someone else on the ley line is dying when they should not, and so you will live when you should not."

Noah remained in Henrietta as a ghost for seven years before meeting Gansey, Ronan, and Adam. He lives at Monmouth Manufacturing with Gansey and Ronan where his perpetual absence from school and unnaturally clean room go unnoticed. His friends are saddened but not surprised to discover that Noah was a ghost. Upon the discovery that Noah is dead, everything changes. Suddenly, Noah is the key to what happens with the ley lines and how the ley line ritual works.

Noah relies on the energy of the ley lines or Blue in order to stay substantial. It is revealed that his spirit is decaying and he needs increasingly more energy in order to look normal. His presence dissipates, he speaks less, and his appearances becomes brief and random. His friends rebury his bones at an old ruined church atop the ley line in an attempt to stabilize his energy.

Noah becomes possessed by Gwenllian, and then by the Demon, which required Blue and then Gansey to command the spirits to release him. Noah sacrifices himself to Cabeswater to bring Gansey back to life. When he sacrifices himself, he is finally able to find peace.

Noah has an unemotional stolidly calm disposition. He is quiet, neat, and always nice to people. In a lot of ways he is completely unremarkable until the others discover that he has actually been dead for seven years. Noah values time alone and speaks sparingly. He is more observant than he gets credit for, often consoling and keeping secrets for the people close to him. As his presence faded, Noah's personality became even quieter and more nondescript. When he did show up, he was nothing like the sweet, friendly Noah the others knew. He would frequently reenact his own death, complete with spasms and pleading with the unseen specter of Whelk.

When he was around his friends, Noah's more extroverted personality appeared. He enjoyed street racing and brawling with Ronan. His sense of humor is highly understated. He is a loyal, caring friend. He likes hugs and kisses, which he didn't get enough of. Beneath this, Noah was sensitive about his death. His sister Adele described him as energetic, cheerful, and animated before his death. Most of what made Noah truly Noah was lost either when he died, or disappeared as his soul decayed.

Noah is described as being grubby and "smudgy," with combed-back, fair hair. He has a dark smudge on his cheekbone beneath his left eye, which is the result of part of his skull caving in when Whelk delivered the killing blow. He has tiny eyes and large ears. Noah is always seen wearing his Aglionby Academy uniform because it was what he was wearing when he died.

Like all magic things, Noah can affect technology. While he is a ghost, Noah seems to be solid and obey most of the rules of living people. He can't float or move through walls, he generally travels by car, and is capable of touching living people. However, only certain people can see him. Aside from his friends, those who can see him include Mr. Gray, the women of 300 Fox Way, Jesse Dittley, and Declan Lynch's girlfriend Ashley. He can appear and disappear more or less at will. He doesn't eat or sleep. Noah is also able to read minds and experiences time in a non-linear manner.

Noah and Ronan are friends and although Ronan adapts quickly to the reality that his friend is a ghost, he still goes through a mourning period which involves excessive alcohol consumption. Ronan writes the word “remembered” onto the dirty window of Noah's abandoned car after learning that Noah is a ghost. Ronan also throws Noah out a window at Monmouth, apparently in jest, because he knows that it won’t hurt him. They are like brothers and care about each other.

Noah and Gansey are best friends. Gansey is horrified by the fact that he is only alive because Noah died on the ley line at the same moment as Gansey was dying from a wasp sting.

Blue and Noah quickly became close friends as Noah decided he would do anything for Blue. Blue trusts Noah very much and upon learning he was a ghost, she supported him and let him draw power from her in order to stay visible. Noah also lets her kiss him since he couldn't die and she wanted to try it at least once, making Noah her first kiss. 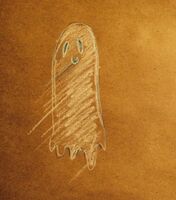 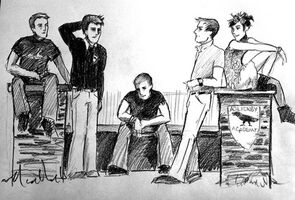 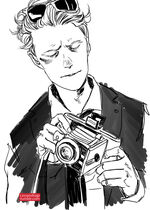 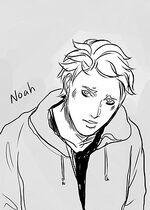 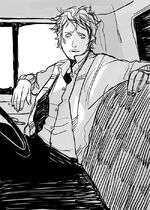 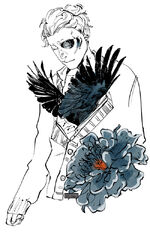 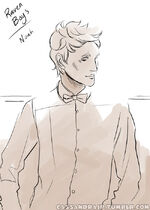 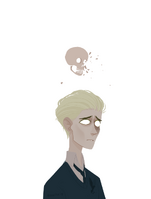 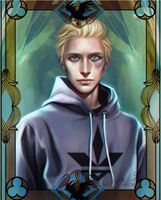 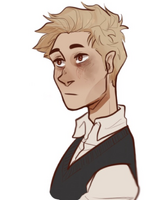 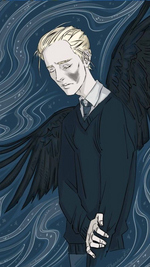 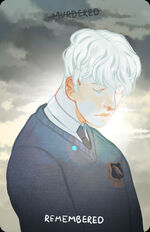 By Dri Gomez
Add a photo to this gallery

Retrieved from "https://theravenboys.fandom.com/wiki/Noah_Czerny?oldid=10516"
Community content is available under CC-BY-SA unless otherwise noted.